The film fades in,with a soft music fade, in a classroom of students all lying on the floor and the professor leaning against the podium. A black & white film is projected on the screen, mixed ambience of classroom & film sound track.

The music fades down and female VO picks, in the fixed close-up shot of the camera.

Quick cutaways of the Screen showing the black & white film in wide shot, shots wandering in the classroom, students lying on the floor, Professor leaning against the podium- to establish a sense of loss of space & time.

…… the film is now off and the ceiling is now gone……

Cut to the Protagonist in mid shot: Zoom into her eyes gradually and then the short dissolves to the sky with the stars. The music mode keeps the same while the scene dissolves to next one.

EXT. BEACH WITH THE PROTAGNIST IN THE HOT TUB, DAY

The Protagonist is in a Hot tub and gradually the Tub starts to move.

Somehow I end up fully clothed in a hot tub…..

Wide Shots of the Ocean tides and the hot tub eventually gets swept along with the high tides.

Ambience of the ocean tides and the sea birds etc.

While the hot tub is afloat, a Dolphin emerges in the vicinity and vanishes back into the water.

…A dolphin jumps out of the water……

While the tub is floating a giant hump black whale surfaces and starts spraying water on the Protagonists. The act is joined by other whales that seem to be synchronized in joining this act.

….An enormous flipper emerges through the surface…..

Scene continues and ends on the completion of the sentence

..performing a show for us.

I am back in the class room...

The sudden movement awakens the Protagonist and she realizes that she was daydreaming while the Mid term review was being delivered.

The Professor is distributing examination papers to the students in the class.

The music mood changes tense to alarm the audience something unusual is about to happen.She starts arguing to the Professor, who keeps cajoling the Protagonist about the test and eventually tries to convince hard, but the argument gets heated up.

Female Vo (continues): ….What is this test?? I didn’t know about this test….

Finally the Protagonist yells out, all the other students gets distracted and turn their attention towards the sound, causing much embarrassment to the Protagonist.

…learning anything about this all semester?? What are you crazy?...

The film fades to black along with the music.

STORY BOARD- Lost in Time 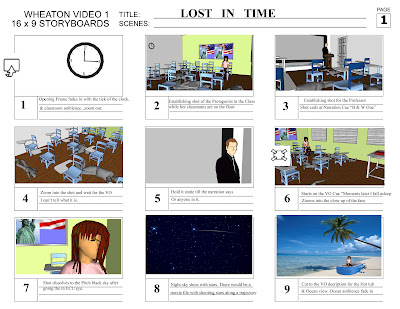 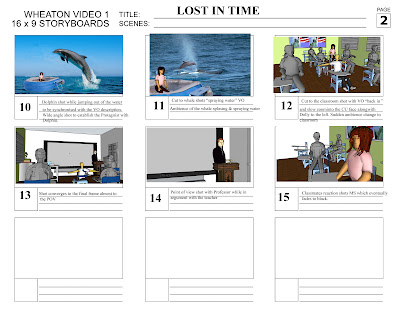 4 POV – Protagonist sees everyone on the floor.

5 WS- Professor on the Podium

6 OTS (Protagonist)- Professor + LCD Screen while the film is being watched in the class.

7 CA- Students lying on the floor, Professor, screen, teachers desk to convey the sense of loss of Protagonist.

8 CU- Protagonist while fades into the dream

10 MCU- Protagonist in the boat on the beach.

12 WS- Establishing shot of dolphins and boat in the vicinity

13 POV- Whale emerges out of the Ocean.

14 ECU- Terrified close-up of the Protagonist.

15 WS- group of whales jumping out of the water.

18 OTS- View of the Professor and LCD screen.

19 MS- Professor with view towards the Protagonist.

20 OTS- Other students with their face turned towards the Protagonist.

Email ThisBlogThis!Share to TwitterShare to FacebookShare to Pinterest
Labels: Assignment 7