Am I Dumb ?
Or just incapable of appreciating art ? This was the most recurrent thought during my trip to the gallery.
I really hope we don't get graded by the depth of our thoughts about the artist and its artwork or by the length of our review, otherwise I am in deep trouble.
Lets start by reviewing the only picture I was allowed to take. 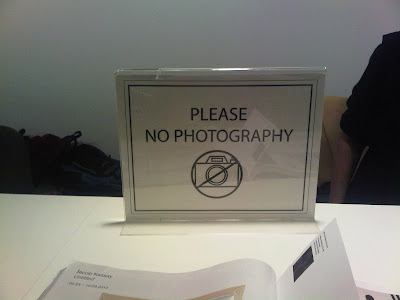 This might have been the only part I understood, pretty self explanatory so no pictures !!!!
In general when trying to appreciate art I look for something that even if I don't like I can deem as unique or in which the amount of work it took to conceive or create is admirable. Sometimes I don't get anything from an artist, very sadly I have to say that is what I got from Frances Stark. I dint find any of its pieces to be sassy, bold or particularly creative or innovative, even more I found that many of its pieces follow a very repetitive pattern (specially the ones with text in it). This wouldn't represent a major issue if I related or liked or even understood the artist which I didn't, maybe as a consequence of not understanding the time and situation in which this work took place for the artist which he mentioned was very important to relate to his work.
But frankly not one thing captured my attention, not the colors, materials, creativity or work behind its pieces. I felt that any of his works (with maybe two exceptions of its painting) could have been done by anyone.
I might be to critic but it is because I went to this exposition with big expectations, I might be paying my frustration for not being able to get what so many people do, that I might be redirecting the feeling towards a bad critic.
I believe anything can be observed and considered as art, so no artist could ever be wrong with any piece he creates, but I also believe that the reaction these art pieces create can't ever be wrong either. I really tried to get something from her pieces, but trying so hard only irritated me which later on transformed into and anger feeling toward its work.

The first part of my review was wrote just after returning from the exposition. Before publishing I kept thinking why I had such a bad reaction to her art and realize that something Mrs Stark said is true, we need to understand the moment and time in which a piece is created, I believe my mood at the time of the exposition really influenced my perception on her work and made me realize how our emotions clearly influence our perception on everything.

“It is the spectator, and not life, that art really mirrors”

Oscar Wilde
Posted by Joel Goldenstein at 11:23 AM