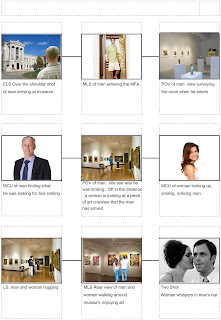 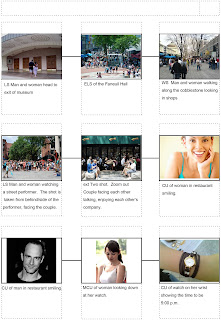 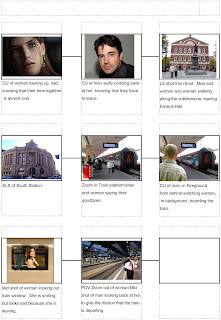 Script
EXT: MFA
ELS of the front of the Museum of Fine Arts. Good looking man in his mid twenties steps into the shot. The shot is from behind from his shoulders up. He is looking at the MFA before he heads in. Only Time by Enya fades in.
Man VO.

POV of man. Pan left then pan right. He looks back and forth, surveying the gallery. It is evident that he is looking for something or someone.

MCU of man smiling. We can tell that he has found what he was looking for.

POV of man. We see why he was smiling. Off in the distance, a woman is looking at a piece of art unaware that the man has arrived.

MCU of beautiful woman in her mid twenties looking up, noticing that the man has arrived. She is happy to see him and is smiling.

LS Man and woman are hugging. They are very excited to see each other.

MLS Rear view of man and woman standing, admiring a painting. They are enjoying the art but, privately, each is wishing that they would leave the museum so as to enjoy their time together more.

Two Shot CU of man and woman. Woman is whispering into man's ear. She is telling him that she wants to leave the museum so that that can have some fun together. He smiles in agreement.
Man VO

LS Rear view of man and woman walking toward the exit of the MFA.

LS Man and woman walking along the cobblestone looking in shops windows, enjoying each other's company.

LS Man and woman watching a street performer. The shot is taken from behind/side of the performer, facing the couple. There are many people who have also stopped to watch the performer.

EXT: Restaurant
Two shot. Couple facing each other talking, enjoying each other’s company . Shot zooms out to street to show that they are eating in a restaurant.

CU of woman in restaurant smiling.

CU of man in restaurant smiling.

MCU of woman looking down at her watch.

CU of woman looking up, sad, knowing that their time together is almost over.

CU of man sadly nodding back at her, knowing that they have to leave.

Zoom in Train platform-Man and woman saying their goodbyes.

CU of man, in foreground, from behind watching woman, in background, boarding the train.

Mid shot of woman looking out train window. She is smiling but looks sad because she is leaving.

POV of woman Mid shot of man looking back at her. Zoom out to give the illusion that the train is departing.
Man VO