In POV shot, someone walks up to the nightclub door and pulls it open. Pulsing muffled beats are heard from afar.

In my dream i am at a live concert.

It’s very dark with many flashing colored lights criss crossing in front and some in the camera lens. The music is pumping full volume and is crystal clear, “Sleepyhead” by Passion Pit. Once fully in the club, it’s apparent that the place is jammed with people excited about who is onstage. Some are cheering with their hands up, others swaying or jumping. Quick CUs to illustrate the confusion and chaos of the scene. It’s dark and the figures are pretty indecipherable, very saturated. We never see who is actually on stage, maybe there is no one?

POV shot turns around to reveal a tall, thin man, MAX sitting on a beaten up, black bicycle. He appears to be pensive about the situation in front of him. After taking in a few deep breaths he appears ready for the task at hand.

Max wheels his bike through the crowd to the front of the stage and gets up on it. He looks around at the audience yet he can never see anything except blinding spotlights. It’s silent now.

Figuring he should do something as to avoid utter embarrassment, he gets on his bike and starting peddling around the stage. From far back you hear a clap and a few whistles from the crowd. It spurs Max on and he rides now with no hands. The cheers get louder, funky music begins, and Max’s confidence grows. A montage of him riding around faster and with no hands, CUs of the parts of the bike, his goofy elated face, the cheering crowd. The montage ends with the overconfident Max trying to pop a wheelie and having the bike flip over and land on top of him as he falls to the ground on his back. A collective “oooooh” resonates through the whole club. Max sits on the floor humiliated.

Max turns around to where the voice is coming from and sees that it is a woman and recognizes her as his friend LUCY. But why on earth is Lucy speaking like a man? He doesn’t say anything just gives her a quizzical look.

be late for class. Let’s go.

Lucy turns and walks out through the back of the stage and is gone.

Max still is sitting on the ground more confused than ever. The

club is now silent and there is no one else there. Slowly it’s

gets darker and darker in the room. Max looks around panicked.

It gets darker until it Max is in complete darkness.

Max has his head down on the desk, apparently sleeping. An arm is on his shoulder shoving him to wake up. It's Lucy.

Max slowly comes to realize he fell asleep in class, again, and snaps his head up. Lucy's voice is back to normal.

in the back. And check the drool

(gestures to her mouth).

Lucy walks towards the door. Max quickly wipes his mouth and grabs his bag. They head out of the classroom.

They begin to walk down the hall.

Oh I need to get my bike (looks around).

What bike? You don't have a bike, buddy.

We walked to class together.

They continue to walk down the hallway getting further and further away. The camera pans over to the left where the beaten, black bike is leaning against the wall.

CU of audience swaying to music

WS of various lights going on and off

MS of Max on bike from front

LS of Max getting to center of stage w/bike

MS of Max standing with bike

LS Max getting on bike and riding around

Tracking shot of him riding

CU of Max’s face happy for the cheers

XCUs of parts of bike

CU of Max with goofy face

Extreme high angle of Max on his back

MS of Max sitting up and coming into frame

MS behind Max as he turns to hear the voice, partially silhouetted

MS of Lucy telling Max to wake up

MS of Max waking up startled

LS of them walking out of classroom from behind

LS of them coming through door of classroom to hallway

PAN from LS to wall where bike is leaning 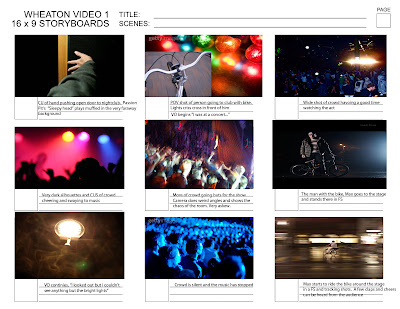 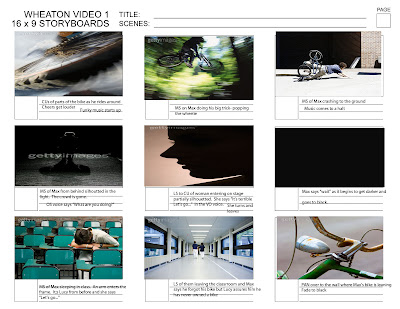 Images courtesy of Getty Images and Flickr
Posted by Lauren Erwin at 10:50 AM