The exhibit didn't start on a good note for me. I say this because I mistakenly walked right by the exhibit room and walked into Auditorium A300. As soon as I opened the door and walked in, the whole class (including the professor) just stared at me. Realizing my mistake, I exited and, only then, did I notice the gallery right next door.

Once inside, the first book that caught my eye was the Pictorial Webster's Dictionary. When I first saw it, I thought that that it was a bible. I don't know why, it just had that look. It had two locks on it that you had to unlock before you opened it. Once I opened it, I noticed that the binding was made out of wood. I really liked that feature. It looked really old but the paper detailing it said that it was bound in 2010. 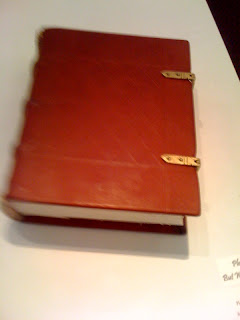 The next book that I really liked was by Peter Madden. The only way that I can describe it is as a scrapbook/diary. My wife likes to scrapbook in her free time so I am used to scrapbooks but this one was different. I liked it because it only had one object on every other page. The usual scrapbook has as many objects as you can fit per page. Each object had a story behind it. Not a long story, just enough to keep you interested. I also liked the fabric, although I am not too sure what it was. It seemed like a sort of rough paper with the pages sown together. 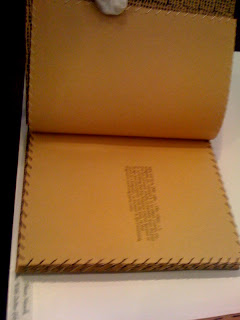 There was a book there that reminded me of books that you would read when you were a child. It was a pop-up book. It was the type of book that when you turned the page, a character would pop out. You could also close doors, open windows and the like. I guess that this is the adult version of a pop-up book. 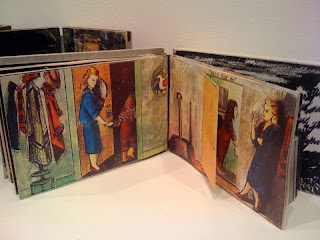 The book that I thought was engaging was the book inside the book. First, there was the book. It was your average book, nothing out of the ordinary. It told a nice story and had beautiful drawings to go along with the it. The one thing that I did notice was that the back binding of the book was very thick while the front binding was average size. 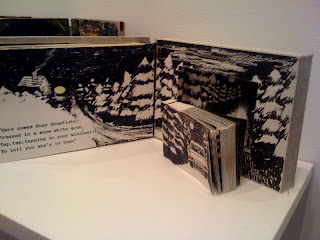 When I got to the last page of the book and came to the back binding, I realized why the back binding was so thick. There was a flip book hidden in the back binding. When you flipped through the book, it gave you a quick movie version of the book that you had just read. I liked that feature. It just seems to me, a really interesting way to end a book.

Email ThisBlogThis!Share to TwitterShare to FacebookShare to Pinterest
Labels: Assignment 3